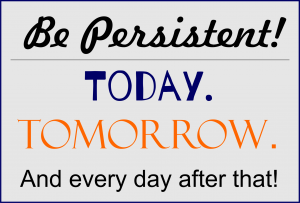 One of the most hurtful things in the lives of small business owners are the critics and the criticism they spew forth. It is so easy to let the critics distract you from your business focus; they want to take away your passion and your energy.

First and foremost, as a small business owner you have to realize that critics will always be there. In a discussion I had with a friend on this subject he said: “Have you ever seen a statue of a critic? I don’t believe that they have an award for the critic of the year, nor do they award the Nobel Prize to the critic of the year.”

No matter how loud they are or what they say, be careful not to allow their voices to become a permanent resident in your mind. I found that most critics are either envious of someone’s success or are failures in their own endeavors and want others to fail to justify their inability to reach goals.

The key word today is persistence. Business success comes to those who believe in what they are doing and who focus on what they know should be done.

I want to end this blog with a quote by Calvin Coolidge, the thirtieth president of the United States:
“Nothing in the world can take the place of persistence. Talent will not; nothing is more common than unsuccessful men with talent. Genius will not; unrewarded genius is almost a proverb. Education alone will not; the world is full of educated derelicts. Persistence and determination alone are omnipotent.”