WHAT IS YOUR BIGGEST CHALLENGE?

Home / Blogs / WHAT IS YOUR BIGGEST CHALLENGE?
‹Return to Previous Page

WHAT IS YOUR BIGGEST CHALLENGE? 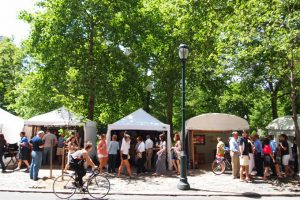 This past weekend I attended an arts and craft show. My purpose in attending was to support the women’s club at my church. They ended up having about 50 participants displaying a very wide variety of wares.

I will be teaching a class on networking in the next few weeks and I decided to use this as part of my material, by observing the vendors in action.

My first action was to slowly walk by all the exhibitors and see if they greeted me.

My take away was that a long term vision was missing and that there was a lack of experience as to how to take their businesses to the next level.

« HEAD OF LETTUCE OR AN APPLE TREE?
IT’S EASIER NOT TO DO ANYTHING »